Our Documentaries in Progress & Development selection showcases nine Finnish documentaries. These projects will also compete for the Best Documentary Project Award, which is a 3000€ package from AVEK to be used towards the international marketing of the film.

Alma is a young woman who suffers from mental health problems and who grew up in a socially alienated family with her twin sister and their disabled parents. Alma is also a musical multi-talent who writes songs for big international artists and who performs her own music to massive audiences around the world. She had nothing, and now she has the possibility to gain everything, if only she would learn how to live with herself. 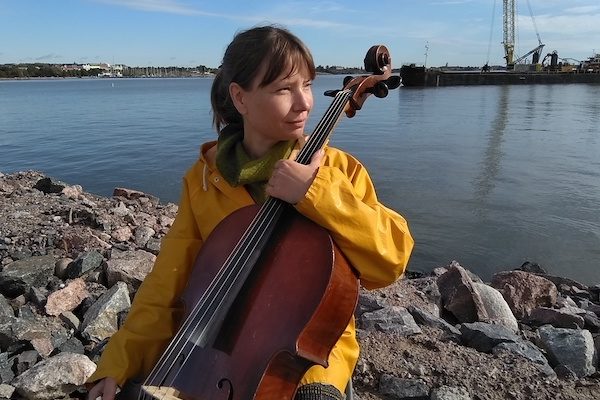 One day I saved a cello from a waste container. The instrument turned out to be 100 years old. Somehow it had travelled from Saint Petersburg to Copenhagen. During the journey there had been the Russian revolution and two world wars. I couldn’t stop wondering, who had made it? What music had been played on it? Why did it end up alone? I decided to take the cello under my arms and start a journey together. On our voyage through the 20th century, we meet violin makers, musicians, composers and musicologists. Each person can reveal something new about the cello, its background and the historical context. Each rendezvous changes the way the director sees her instrument. Towards the end, the cello learns it is not alone. With the director, it finds its place in the orchestra. Now the music can begin.

Gen Z has created a new set of rules on how to gain the approval of their peers. This need for approval has created a phenomenon and a subculture called clout or clout chasing. To get clout – admiration and influence on social media – they steal, use drugs, or fight and post it online for everybody to see. The more they post, the more clout they get.

Clout Chasers is a modern coming-of-age story that mixes observational material with social media content, produced by the main characters in the film. The film plays with the tension between illusion and reality that forms between our observational material and their online content. The film is an immersive experience for the audience – a raw, dark but heartwarming story about young new wave influencers who seem to be lost in this game of fame.

The emotionally broken Sámis finally get back their ancestral heritage that has been taken away from them. The film director West faces the collective pains and starts to break the outside image of the Sámis, not only for herself, but for the wellbeing of the whole nation.

The film is set at a turning point in the museum world. While the Sámis have to redetermine their relationship to identity, the national museums have to deal with their colonialistic history. West follows the different stages of the repatriation processes. The Finnish National Museum’s Sámi collection is returning home, but the holy drums are stuck in museums around Europe. West takes the audience behind the scenes of the museum world where the debate of the othering and cultural inequality is causing inevitable change.

In 1984, 11 miners locked themselves inside the mercury mines of Almadén (Southern Spain) for 11 days to demand better working conditions. 35 years later, an emigrated local filmmaker comes back to post-industrial Almadén with the idea of making a film about the mining strike. What starts as a reenactment of a past strike turns into a social movement attracting media attention throughout Spain.

The participants increasingly feel closer to the strikers of 1984, than to protagonists of a reenactment film. As in 1984, the community’s support for the strikers is overwhelming. Politicians worry that this film project is turning into a social conflict. Tensions arise between participants, the mine management and the filmmakers. And the 11th day is fast approaching…

Lynx Man is a documentary about pensioner Hannu’s entrancing journey towards finding a connection with the Eurasian lynx hiding in the forests. With his trail cameras, Hannu opens a gateway into the Finnish nature and towards a genuine connection with the environment.

After an accidental injury, Hannu is living on a disability pension at his home farm. One day, he finds a
dead lynx that has been hit by a car. Hannu realizes that the lynx who lived in the area during his childhood have returned. He is filled with excitement and vigour. He sets up trail cameras in an effort to make contact with a species he thought he had lost forever. Six months later, there are a total of 23 cameras clicking away in the woods.

Can Hannu save the Eurasian lynx, or is it in fact nature who ultimately saves the man?

The documentary of Michael Monroe is a story of a man who fights ambitiously for his dreams to become the world’s biggest rock star. On this lifelong mission he makes it to the top of the rock scene all over the world. Instead of gaining huge fame and fortune, he becomes one of most respected yet least well-known stars – the best kept secret in rock´n roll. He could have ended up dead with a needle in his arm but decided to follow his ambitions and continue his mission instead. Next year Michael turns 60. He lives in Turku, Finland, still dreaming of an international breakthrough. COVID-19 forced him to stop for the first time in his life. It has raised bitter memories from the past and made unclear what is still to come.

A documentary about a young woman who no longer agrees to remain silent. The project is confidential.

The documentary follows Finnish Laura Eklund Nhaga’s journey as she tells her thoughts about living as a racialized person in Finland. It shows her travels to the USA to meet Heather Booth, from Midwest Academy, to learn about organising and how to bring those teachings into action. Power of the People is a documentary film about personal impact, finding your own voice and learning how to effectively work for change.

This website uses cookies to improve your experience while you navigate through the website. Out of these, the cookies that are categorized as necessary are stored on your browser as they are essential for the working of basic functionalities of the website. We also use third-party cookies that help us analyze and understand how you use this website. These cookies will be stored in your browser only with your consent. You also have the option to opt-out of these cookies. But opting out of some of these cookies may affect your browsing experience.
Necessary Always Enabled
Necessary cookies are absolutely essential for the website to function properly. These cookies ensure basic functionalities and security features of the website, anonymously.
Functional
Functional cookies help to perform certain functionalities like sharing the content of the website on social media platforms, collect feedbacks, and other third-party features.
Performance
Performance cookies are used to understand and analyze the key performance indexes of the website which helps in delivering a better user experience for the visitors.
Analytics
Analytical cookies are used to understand how visitors interact with the website. These cookies help provide information on metrics the number of visitors, bounce rate, traffic source, etc.
Advertisement
Advertisement cookies are used to provide visitors with relevant ads and marketing campaigns. These cookies track visitors across websites and collect information to provide customized ads.
Others
Other uncategorized cookies are those that are being analyzed and have not been classified into a category as yet.
SAVE & ACCEPT
Powered by