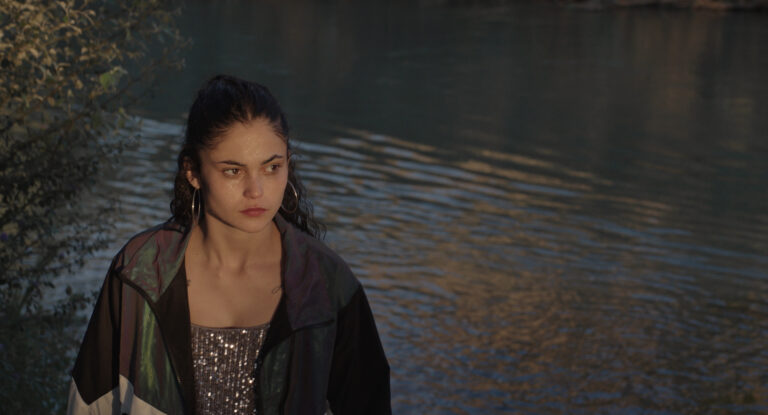 Cicadas thrum, eventually reaching a deafening crescendo. The air is dry and hot. Vegetation has turned brown and brittle. A storm threatens. The river waits. Whispers of an old wives’ tale creep through the village – the river chooses to flood when it falls in love with a local woman and wants to possess her, the object of its desire. Which woman will wash away this time?

Such is the crux of the film El Agua (López Riera, 2022) set in a small Valencian village during the height of summer; where the river’s mood is never far from the inhabitants’ minds.

The intertwining of women, water and imminent danger within mythology is nothing new (just ask Ulysses and the sirens); but overwhelmingly the imagery and discourse surrounding water is largely tied to the Western ideal of the feminine, and thus something unpredictable which needs to be managed (Hayman, 2012). For example, in Celtic and Norse folklore selkie women are trapped and pacified by male lovers who hide their seal pelts. In the mythology of the Kunwinjku people of Western Arnhem Land, Australia, the Yawkyawk is a female creature much like a mermaid who has the power to shapeshift and manipulate the weather. Then, of course, there are countless impressionist and expressionist artists who have depicted women bathing, rendering both the female subject and the water as passive and subject to the male gaze. For all its supposed neutrality, water is gendered. Which is why I find El Agua’s love story between the river and eighteen year old Ana inherently subversive. A true example of what Eleanor Ruth Hayman (2012) calls “feral waters”, in other words – water which does not adhere to the hegemonic narrative.

I have viewed the river in El Agua, as I have always intuitively viewed water – through a new materialist lense. Meaning, I relate to it as a genderless, non-human entity with its own sense of agency, and arguably it possesses even more agency and influence than any of the human characters in the film. Every single woman in the village knows the story of the water and what will happen if it gets inside her. There is no escaping the river once it has its heart set on someone. It cannot be controlled or pacified and (most feral of it) certainly not by the men of the village. The water floods as it wishes and potentially wrecks lives. It is also quite feral of Elena López Riera, the film’s director, to create a romantic component which deviates so sharply from the heteronormative script. The river is not male, is not even human, thus its love for Ana is unmistakably queer.

If the river in El Agua incites such yearning in the women it loves, then they should not fear or fret; for this feeling is just love for something greater than humankind. A love that is subversive, queer and feral; transcending species, gender and other hegemonies.

But, El Agua at least for me, is not just about the subversive and queer nature of water, but also about unquenchable longing, home sickness and interconnectedness. So much of the sensory world of the film reminded me of the hot, dry-yet-heavy, insect dominated summer on the east coast of Australia. A place and way of being I cannot think about without conjuring images and memories of the Pacific ocean. The women of the Valencian village haunted by the river, constantly wonder what it must be like to have the water inside them; I imagine it feels like a deep yearning for an old friend. At least this is how I feel about the Pacific ocean. Even though I choose to live almost as geographically far from it as possible, a part of that ocean lives and breathes inside me day after day after day. And it is the ocean inside me that beckons me home to Australia every two or three years. Like a witch has performed a summoning ritual, I will out-of-the-blue feel an intense, almost painful desire to be embraced by the salty and restless waters of the Pacific. It is also the ocean inside me that demands I live by a coastline, that remains aloof and unmoved by impressive mountainous landscapes or serene rolling countryside, and it is the ocean in me that draws my eye toward blue more than any other colour. If the river in El Agua incites such yearning in the women it loves, then they should not fear or fret; for this feeling is just love for something greater than humankind. A love that is subversive, queer and feral; transcending species, gender and other hegemonies.

Human beings cannot survive much longer than three days without water, our blood is 83% water, the first nine months of our lives are spent in a cozy amniotic-brine. We should all have love affairs with water because we are all bodies of water. We all have a subversive-feral river living inside us.

Grace grew up in Australia but has called Helsinki home for over a decade. She’s a writer and postal service worker who loves – post punk, tattoos, hockey and all bodies of water.