Seek Bromance (2021), the latest work by filmmaker and performer Samira Elagoz, is an evocative portrayal of the initial stages of seduction and limerence as well as the frustrations and anxieties of a romantic relationship between two transmasculine-identifying protagonists, both simultaneously exploring their identities.

Made during lockdown, Seek Bromance is a compilation of documentative records of two strangers in an isolated world in which the camera serves as a witness to their everyday realities. Its central purpose, even when staging both the private and intimate, seeks to stay true to itself. (This is emphasized by Elagoz’s physical presence, whose live monologue in-between the scenes on the stage creates an additional layer of context and detail to everything that is shown on screen – the artistic rendition of a story that is deeply personal.)

As bits and pieces of flirting via email are shown on the screen, it is soon that their intense three-month romance and artistic collaboration begins.

It all starts online: after receiving a mysterious Facebook message from someone named Aris Pereira, Elagoz embarks on a journey where he eventually meets the person behind the account and his soon-to-be collaborator and lover, the American-Brasilian artist and former glamour model Cade Moga. The fake male-presenting profile turns out to have been a way of practicing masculinity to Moga who soon after their virtual encounter comes out as a trans man. Intrigued by all of this, Elagoz contacts Moga and invites them to be part of his project. As bits and pieces of flirting via email are shown on the screen, it is soon that their intense three-month romance and artistic collaboration begins.

We journey with Elagoz as he moves to Los Angeles where Moga resides, with plans to shoot the film without a script. There’s only the theme: “three lovers, the camera being one of them.” Everything changes, however, as international travel is abruptly banned in most countries due to Covid-19. For three intense months, Elagoz spends time solely with Moga, driving with them around in the pandemic-ridden LA and the deserts of Las Vegas. Despite all of this, desire and lust are gently explored, pasts are shared, and change is welcomed.

Having agency over one’s own body is central throughout the film. Recognising himself in Moga who at the time of the filming identifies as a trans man, Elagoz begins to expand on his gender expression, newly facing their feminine identity. 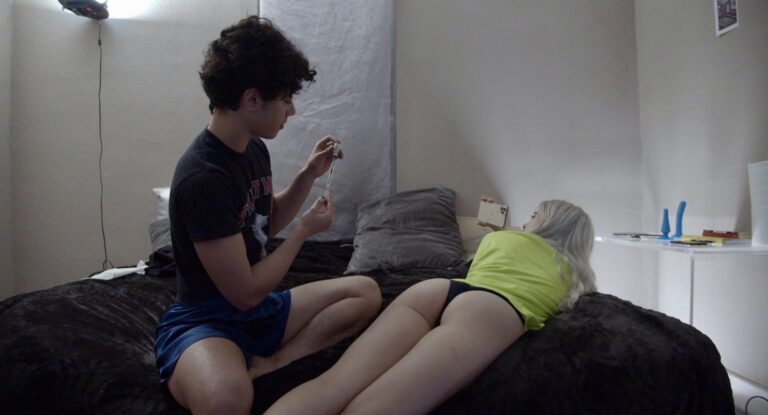 Elagoz asks Moga to give him his first testosterone shot.

Both Elagoz and Moga return to this notion when it comes to their relationship as well as their journeys with transitioning. Past selfs and experiences with trauma are contested tenderly and together: bidding farewell to his womanhood, Elagoz asks Moga to guide him through his medical transition by giving him his first testosterone shot.

– both Elagoz and Moga drill into each other exposing, questioning and challenging each other’s notions and beliefs on normative and binary ways of expressing one’s gender or sexuality.

At times, both protagonists and their realities become almost fictitious as different characters are acted out or performed. The aesthetic use of two adjacent screens that Elagoz and Moga occupy respectively remind of a virtual space, much like they would be conversing in a zoom call. This juxtaposition also stages their dialogue as emotionally relentless, and perhaps for this reason real – both Elagoz and Moga drill into each other exposing, questioning and challenging each other’s notions and beliefs on normative and binary ways of expressing one’s gender or sexuality.

Eventually, the relationship comes to an end but Elagoz’s journey with testosterone and his other lover, the camera, continues. He points out in the live monologue that although the film includes his transition into becoming a transmasculine person, the film is clearly not only limited to that narrative.

Despite the four-hour runtime, much is still left unshown and unsaid. It is here, where Seek Bromance as a work is the radical intertwinement of multiple spaces, the real and virtual, that traps with provocation and captivating sequences of friction and tension, bodies in movement and arresting poetry, finally arriving at the true presence of one’s own body as it is. It leaves one with the complex and unanswered questions of what remains and happens after this encounter. As Elagoz says, Seek Bromance could ultimately be seen as a love letter to someone whose presence had a lasting impact on his life. 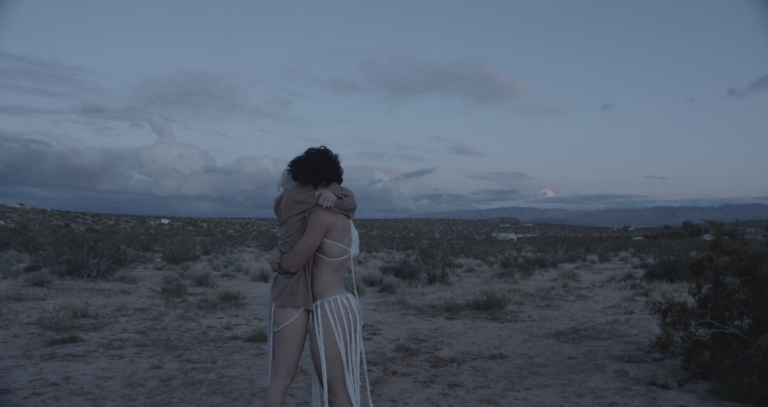 Seek Bromance could ultimately be seen as a love letter to someone whose presence had a lasting impact on his life.

Nimco Kulmiye Hussein (they/them) is a curator and writer based in London, UK, working at the intersection of research, culture, and art. Their praxis draws from postcolonial and queer-feminist perspectives, focusing actively on participatory practices that bring people together through critical, timely and meaningful narratives. Exploring the site of new media and digital visual culture, Kulmiye Hussein facilitates innovative operational modalities and practices together with artists, creative practitioners, and arts institutions.