The poster for 2022 is inspired by the historic circus catalogue. The artist of the year 2022 Tiitu Takalo wants to show the historical freaks as active agents. We interviewed Takalo about the creative process, circus and the colour red. 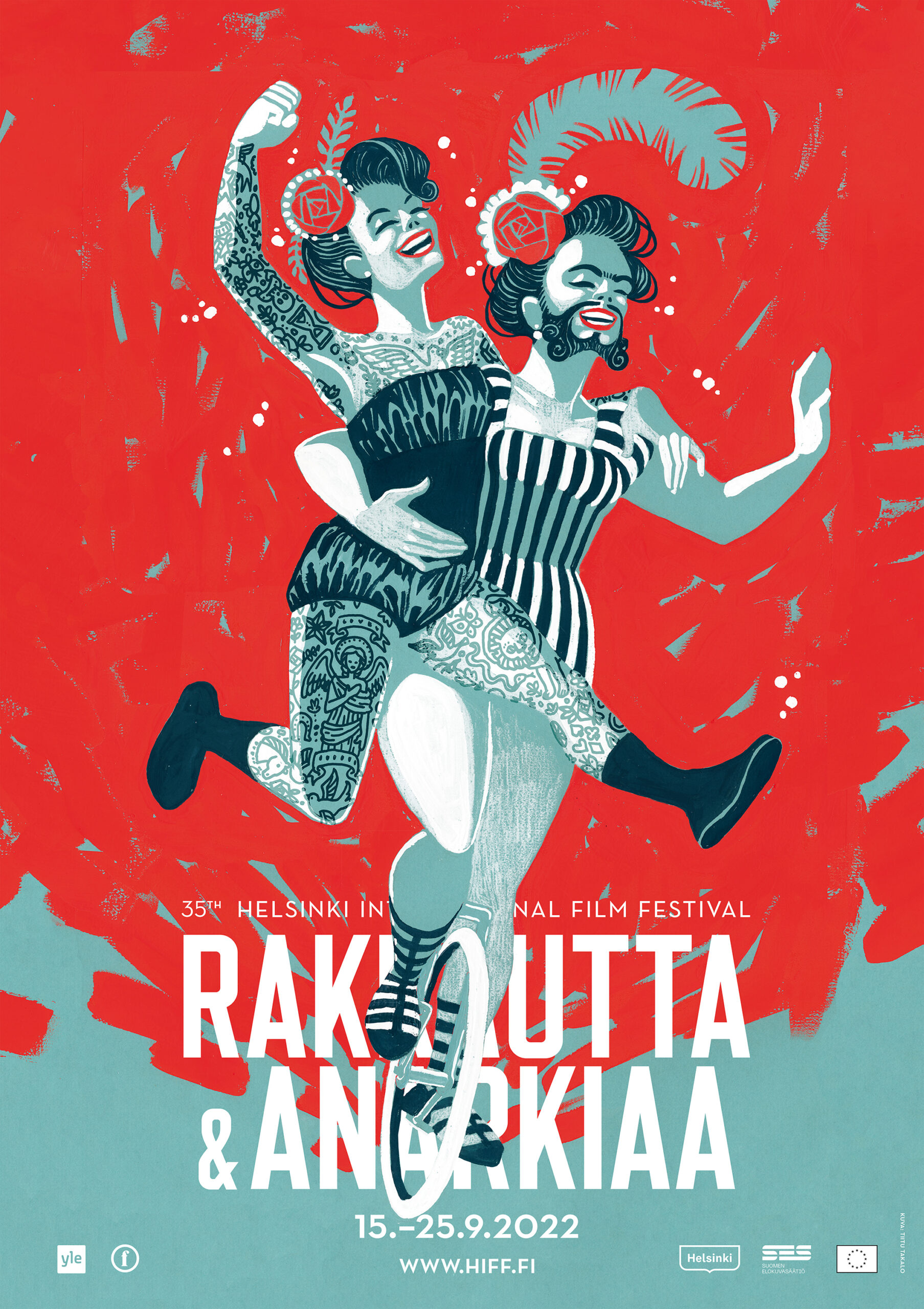 The thoroughly tattooed and bearded figure are riding a unicycle with their hands in the air. With their vehicle and costumes, they could be on a journey from the circus of the past. The bright red takes one’s thoughts to love as well as revolution.

This year’s poster is by Tampere-based artist Tiitu Takalo. Takalo’s cartoons depict with a perceptive and gentle touch the lives of those who deviate from the prevailing norm. She is also a pioneering figure in the field of feminist comics. Many of her comics are based on real events or draw from her own life. The characters in the poster are inspired by historical figures Clémentine Delait and Maud Wagner.

Samppa Ranta, the HIFF graphic designer who selects the poster artist each year, met Takalo in Tampere early in the process. He liked the illustration the cartoonist had done for the “Kissing at the Barricades” calendar, which celebrates alternative anniversaries, and wanted something similar. “Tiitu’s illustration exudes a joie de vivre and a theme of equality. The work shows a strong handprint, as the poster was made on a drawing board on paper and not on a computer. This time I wanted this kind of poster for the R&A,” comments Ranta.

Oddity that has been reclaimed

Glowing in bright red and turquoise, the poster has been inspired by early 20th century circus imagery. Takalo tells that she immersed himself in the world of circus images and browsed through materials from various search services. A central part of her work is background work, browsing references and research. Immersion is an important part of the artistic process. She says she also often goes to the library for inspiration. This time, Takalo was particularly impressed by the aesthetics of circus imagery from the 1800s and 1900s.

Takalo tells, that she wanted to make the characters in the poster active agents, not just objects of the gaze. She also reflects on the fact that in the circus, the so-called freaks have been able to make a living out of their “freakiness” and – in a way – reclaim it.

So who are Clémentine and Maud, the characters inspiring the poster and the new look?

Clémentine Delait, described as France’s most illustrious bearded lady, at the turn of the 1800s and 1900s. Rumour has it, that Delait who had shaved her facial hair, had seen a bearded woman with a wispy stubble at a carnival. Inspired by this, Delait declared that she could do better,
and the rest is history. She also obtained an exemption from the authorities to wear men’s clothes at a time when it was against the law to do so.

Maud Wagner was an American circus and tattoo artist. Wagner who was working as an aerialist agreed to go on a date with a tattoo artist on the condition that he would teach her how to tattoo. The tattoo artist became Wagner’s spouse, and soon her own body was covered in ink, birds, lions and flowers. The body of a woman tattooed all over was once an attraction.

The joyful duo seem to be could be on their way either to amusement, revolution or perhaps to see a festival film?

In the poster, these two figures, who challenged the prevailing norms of their time, travel together on a unicycle. Clémentine has taken Maud under her arm. This looks like a gesture of care, solidarity or support. The joyful duo seem to be could be on their way either to amusement, revolution or perhaps to see a festival film?

The colour red dominates both the poster and this year’s look. Takalo says red is a very meaningful colour for her, although not in the traditional political sense. “It’s a really powerful colour, a colour that oozes power. More than any other colour.” It also attracts attention. “When the sun rises and the light increases, the first colour the human eye notices is red.”

Perhaps Maud and Clémentine are on their way to the rising sun? ■