The prizes for the Cut to the Chase – R&A Shorts national competition have now been awarded. The award for Best Short Film went to Mari Mantela’s Rabobesto – Or How I Saved a Monster.

The national competition of the Love & Anarchy Festival has now been decided. The jury declared Mari Mantela’s short film Rabobesto – Or How I Saved a Monster as the winner. The film focuses on a woman on the verge of marital life who loses her heartbeat and turns golden. Beneath the surface there is a depiction of the traces left by an alcoholic parent which follows one into adulthood. The winner will receive an Aurora prize of 2000 €, sponsored by Aurora Studios.

The New Wave Award, sponsored by Finnish Film Foundation, was awarded to Terhi Nieminen’s Granada. The film’s protagonist Terhi is forced to give up her old Granada car, a decision that evokes difficult feelings. 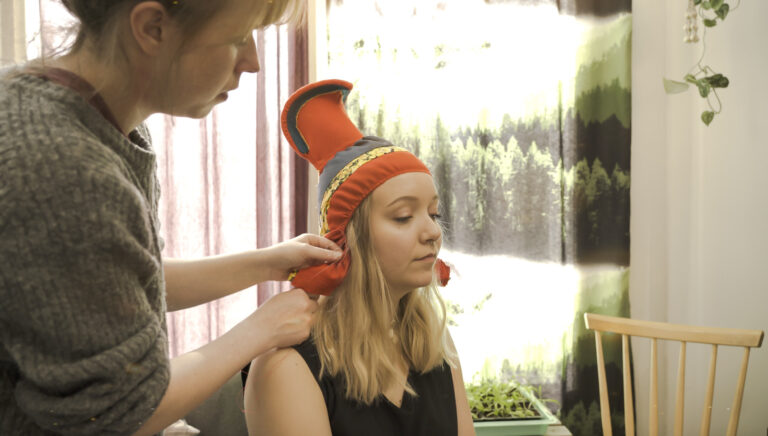 The Moving People and Images Award went to Sunna Nousuniemi’s Boso mu ruovttoluotta, a personal portrayal of the consequences of sexual violence. Although the past cannot be changed, the support of the close circle and a Sámi horned cap, a gift from a friend, help her to heal. The prize is awarded to the filmmaker whose work contributes to inclusivity and diversity. It is funded by Yle, AVEK and Finnish Film Foundation.

The student prize was awarded to Niko Väistö for his film Kaamoksen valossa. The documentary short film is about the love of truck dogs. The jury’s honourable mention was awarded to Reetta Saarikoski for her film Ensi kesää varten, which focuses on the oldest giant water lily in the Botanical Garden. The flower, which is over a hundred years old, blooms only at night.

This year’s audience vote went to Lotte Laitinen‘s Levykauppa, which – as its name suggests – is about social relationships and emotions in a record store.