Riiko Sakkinen (b. 1976) is the founder of Turbo Realism, a 21st century art movement, that depicts globalized capitalism with mocking verisimilitude. He composes drawings, paintings, murals, slideshows, installations and interventions that comment on consumer culture, from fast-food to prostitution, from hypermarkets to drug cartels. Sakkinen commissioned Syria Beheaded, from Ghana. The traditionally hand painted movie poster depicts war as a fictive movie. The painting is hanging on the wall above the stairs leading to the Culture Center Andorra. 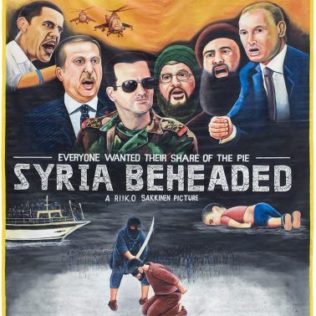